169 victims of sex trafficking and exploitation 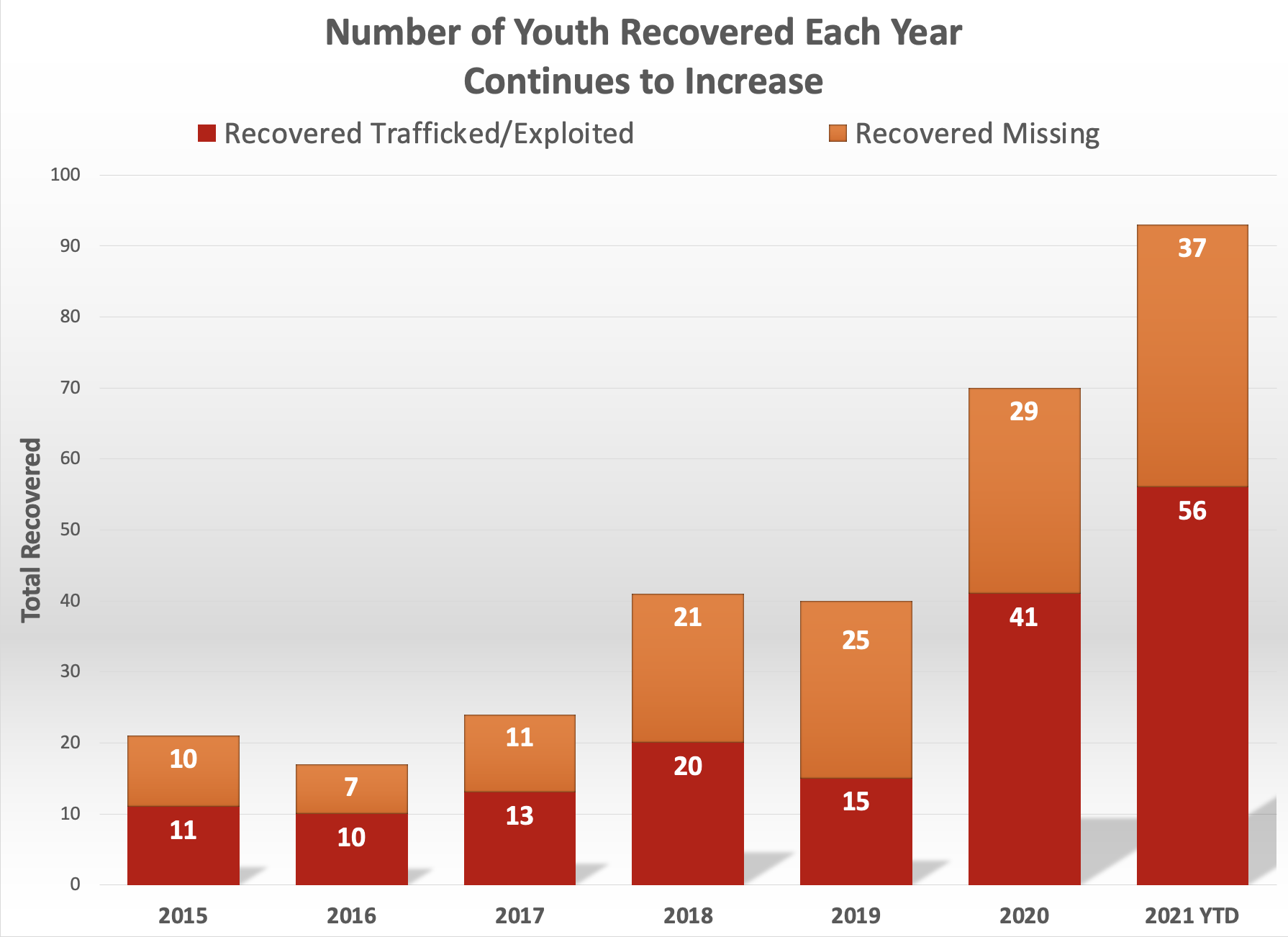 Please support our efforts to recover Texas youth before they become victims.

We work with families to locate and recover missing teens.

The longer a teen is missing, the more vulnerable they are to becoming victims of child sex trafficking and other forms of human trafficking. Local law enforcement often lacks the technology, resources or manpower to aggressively search for each runaway teen.

Partner with us.  Donate or volunteer today.

— females are more likely to run than males

— most youth are gone only a week or less, while a sizable proportion are gone for more than a month, especially among older youth

— the likelihood that a youth who has run will run again is relatively high, particularly during the period immediately after return to care

— labor trafficking:  when an individual performs labor or services through the use of force, fraud, or coercion

— sex trafficking:  when an individual of any age performs sex acts through the use of force, fraud, or coercion in exchange for compensation

— child sex trafficking:  when an individual under 18 years of age performs sex acts in exchange for compensation

— does not require use of force, fraud, or coercion

— Sex trafficking is the fastest growing business of organized crime, and the third-largest criminal enterprise in the world.

— Child victims are a particular concern.  The average age at which girls first become victims of prostitution is 12 to 14, according to several studies.

— Traffickers are increasingly active on social media, which they use to target victims and advertise to customers.

However, CST disproportionately impacts those that are young, financially poor, youth of color, girls, immigrant, and/or LGBTQ.

Follow us on social media for updates and Missing Alerts

Missing for over 2 months – Spotlight Texas Teens on NCMEC

We want to Spotlight a few of the Texas Teens who are listed on NCMEC and have been missing more than 2 months. Please pray [...]

We compiled a list of teens missing from Texas that are listed with the National Center for Missing and Exploited Children, as of December 16, [...]

We compiled a list of teens missing from Texas that are listed with the National Center for Missing and Exploited Children, as of November 4th, [...]

Paliscope brings AI to the fight against Human Trafficking 4theONE Foundation is honored to announce Paliscope is partnering with us to help locate and [...]

To our supporters and those who care about missing and sex-trafficked children in Texas, 4theONE Foundation was started in November of 2015 by a [...]

With your Generous Support we have…

With your Generous Support we have… Recovered over 215 minors   Of those, over half were victims of human trafficking, domestic minor sex trafficking and [...]

4theONE Foundation – Dedicated to Finding Each ONE

4theONE Foundation... Dedicated to Finding Each ONE Missing, Exploited and Sex Trafficked Minors When a child goes missing, fear and helplessness can set in quickly. [...]